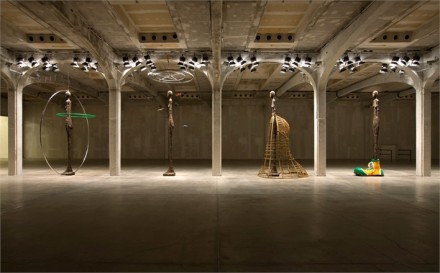 John Baldessari, Giacometti Variations, 2010. Via Vogue
With his newest show, Giacometti Variations, at the Prada Foundation in Milan, conceptual artist John Baldessari comments on the culture of fashion in a city known for its style. “There is currently a blurring of art and fashion. It is de rigueur that fashion models be extremely tall and thin,” says Baldessari. “Giacometti’s figures are the most emaciated and skinny sculptures that exist. Why not push that further?” 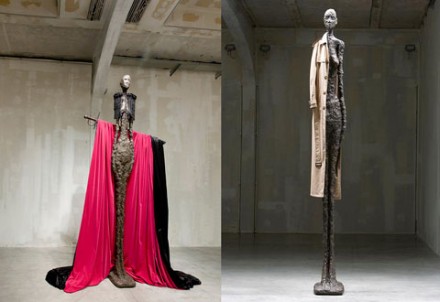 Via Very Cool
More story after the jump… 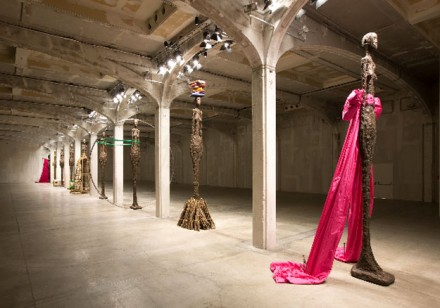 Via The Daily Beast
Referencing both the theatrics of a fashion show and the ultra-thin models in the industry, the lithe figures drip with designer clothes in surreal proportions, their outfits changing twice throughout the exhibition. 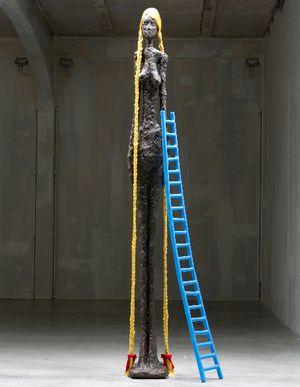 Via The Independent
From Rapunzel braids to oversized trench coats and clown shoes, Baldessari shows off his versatility while maintaining his sense of humor. Though the 70-year-old artist favors simple sweaters and blue jeans, when asked about his relationship to the garments in the show, he said to Wallpaper,“Maybe this is my inner self coming out.”

Via The Daily Beast
Curated by Germano Celant, the nine bronzed sculptures—in the iconic style of Alberto Giacometti—were produced by Miuccia Prada. Providing the accessories as well, Baldessari acknowledged Prada with an oversized bag, complete with a mini, Oscar-like statue inside. 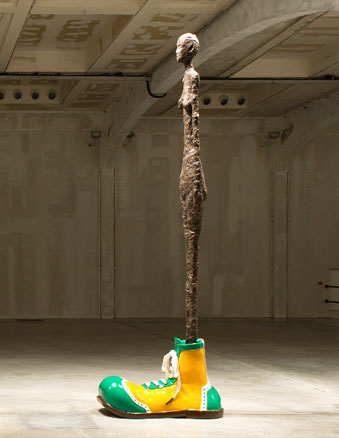 Via The Daily Beast
The Prada Foundation was founded by Patrizio Bertelli and Miuccia Prada in 1993, with Germano Celante brought on as artistic director in 1995. As a non-profit, the foundation was born of a Prada’s passion for contemporary art; “What interests me most is when a work of art is no longer just an object, but also touches reality and life,” says Miuccia.
-M. Phinney
Related links: