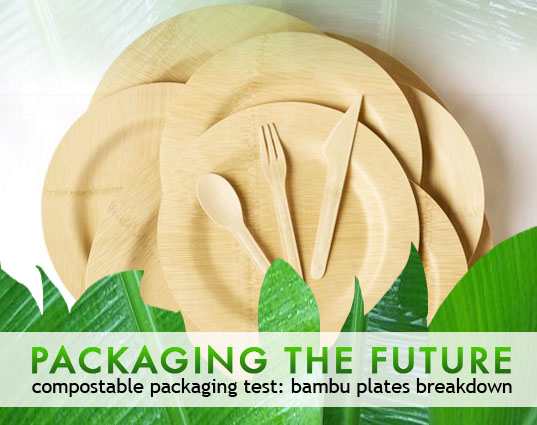 This week we’re thrilled to bring you the latest installment of our Packaging the Future compost tests, where we break down the real-life biodegradability of eco packaging. Although I started this series expecting less than stellar results (what with all the nay-saying regarding biodegradable packaging), I am now pleasantly surprised to say that we are two for two! This week we put the compostable Bambu brand bamboo plate to the test and found that it really does break down quite nicely - hit the jump for our in-depth report! 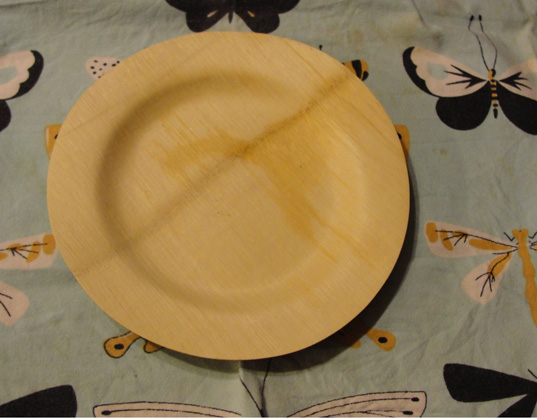 I took the above picture on July 8, 2010, just a few minutes before I added the plate to my backyard compost (which, as previously detailed, is far from ideal; I pretty much just throw my kitchen scraps and other compostables on the pile and mix it up with leaves and other garden detritus. I’m not a hard-core composter, so this test is imperfect in that there would be different results if one were to try it in a more well-turned, ventilated, balanced and paid-attention-to compost heap.
However, my admittedly haphazard approach to composting has an advantage, which is to show what would likely happen if any of the materials I am testing makes its way into the environment (in other words, becomes litter). Because, after all, unless someone is composting in their backyard like me, or has compost pickup in their city (like Seattle, San Francisco and London), most compostables end up in the landfill, where, due to the lack of oxygen, they won’t break down. The anaerobic conditions disallow bacteria, molds and insects to do their important work, and so even the most biodegradable stuff in the world will remain intact for decades (cue 30 year-old bananapeels).
Pages: 1 2 3 4