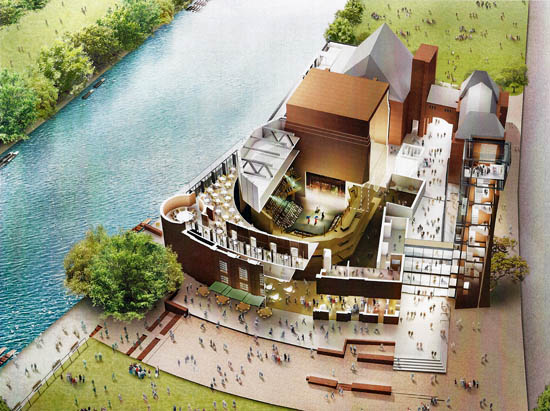 There are two sides to Stratford on Avon. Both concern Shakespeare. They haven't had too much to do with each other over the years, despite being cheek by jowl in a small, pretty Warwickshire town. Tourists are one thing, theatre-goers are another and there's not as much overlap as you might imagine. This, however, is about to change. The Royal Shakespeare Company is opening up its previously hermetic main theatre to embrace the tourist hordes.
The RSC had a difficult time of it around the Millennium. When other cultural organisations were busy building their Lottery-funded palaces, the company first shilly-shallied, then got way too ambitious. It drew up plans to completely demolish its huge, remarkably ugly 1930s theatre and replace it with a fashionable "icon" building by Erick van Egeraat. But the existing unloved theatre nonetheless had a rather fine Art Deco foyer and frontage, so the conservation lobby put paid to that. Following the departure of its then director Adrian Noble in 2003, the RSC did a big rethink, tore up the plans and started again. This autumn, the results will finally be unveiled. 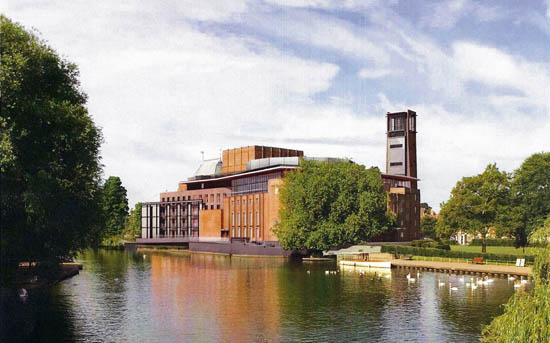 The ambition had to be curtailed, not least because the value of its ring-fenced Arts Council Lottery grant was worth less and less as the years went by. But finally, the £113m programme - which includes the temporary and distinctly good Courtyard Theatre by Ian Ritchie, a little way downriver, to house productions in the meantime - is all coming together. The regenerated Royal Shakespeare Theatre does not open to the public until the autumn, and plays will not start up there until the new year, but it is looking the part already. The clutter along the riverbank has gone. It opens up on the town side with generous new foyers where there used to be a blank wall. There's a rooftop restaurant. The auditorium and stage are completely rebuilt inside on an Elizabethan template, much smaller, much more intimate than the previous Odeon-like set-up. Oh, and there's the tower. 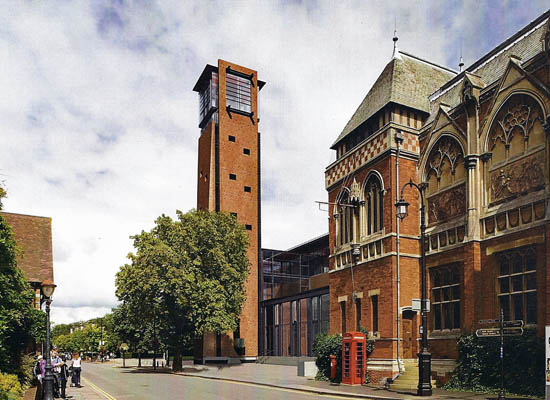 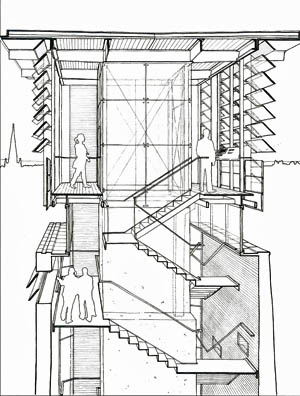 The tower may come as a bit of a surprise. This is the part of the project that has nothing directly to do with theatre. It's an observation tower, but it's no dumb Space Needle. Instead, it's a subtle tapering brick column with a glazed gallery on top. It's both an attractor and a mini-exhibition space, with objects from the RSC's collection of nick-nacks set in niches in the thick walls. You'll go up in a lift, gaze around at the Shakespearian landscape, descend the stairs and find yourselves in the theatre foyers. You might want to explore further. You might want to try the cafι, or book a ticket. The key thing from the RSC's point of view is simple: they'll tempt you through the door of what was previously a very forbidding place.
The old theatre was locally known as the "Jam Factory" when it was built by the redoubtable Elisabeth Scott in 1932 following a fare that burnt down the 1879 original - built by a local brewer. In fact the 1930s version was the first significant public building by a female architect in Britain, and a competition-winner as well - so it's a bit of a shame that it was so widely hated. The elderly composer Edward Elgar, who was meant to be music director there, refused to set foot inside. Directors, actors and audiences struggled with the cavernous, Odeon-like interior, with most of the audience set miles back from the stage. So the big revamp is long overdue. I was, however, a bit disappointed by the tower. Yes, I like the way it looks like a chimney alongside the Jam Factory. It is also the same height as an ornamental tower, lost since the fire of long ago, at the Victorian end of the complex. Trouble is, that tapering shape means there is not very much room at the top. You stand behind big glass louvres, which moan mournfully in the wind. 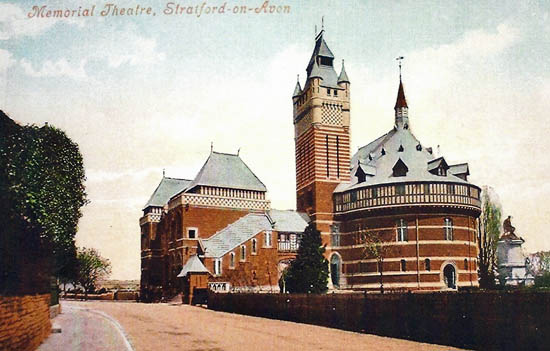 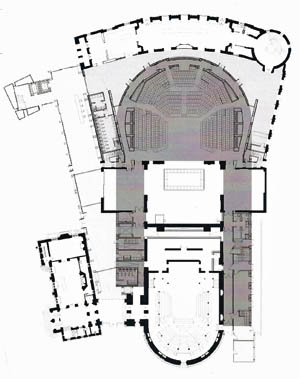 The architects of the latest incarnation of the theatre are Simon Erridge and Rab Bennetts of Bennetts Associates, who previously worked together on the new Hampstead Theatre. They are modernist to their roots, but they are determinedly anti-icon. They've never done funny-shaped buildings for the sake of it. Their plan for the RSC, working with theatre consultants Charcoalblue, was simple in concept, devilishly difficult in the detail: to gut the old place, drop a new, smaller, tighter theatre into the shell, and rearrange everything else, from foyers to dressing rooms, so that both the new theatre and the smaller Swan Theatre backing on to it in the original Victorian building work as one internally. It's a common enough layout for new theatres, but making all this happen in the pile-up of previous RSC buildings on the site was not easy.
The old Art Deco foyer - always much too small for what was a 1350-seat theatre - is restored as a bar. There are new additions grafted onto the flanks, but once again you can walk right past the building on the river bank. The new storey on top does for the theatre what similar restaurants have done for museums from the National Portrait Gallery to Oxford's Ashmolean.
Learning from the successful experiment of the temporary Courtyard, the designers have made the new auditorium a little more tightly curved around the familiar Elizabethan thrust-stage. It now has 1,000 seats: they seldom sold more than 1,000 in the old place, I'm told. By bringing the stage forward into the auditorium - previously it was as remote as a cinema screen - this means that the old flytower becomes redundant. Except that it will now be used as storage space for productions.
The auditorium is good. It has been made deliberately rough-and ready, with rusted steel columns and rough-sawn oak. The hulk of the old building is opened right up to the roof and left deliberately raw, and the original teak stage floor is recycled in the foyers, so you'll be treading on the same boards as the great actors of the past. This all works well. In contrast, the new rooftop extension is a bit corporate-modern business-park in feel. I'd have preferred this to be less slick, with more of the deliberately scuzzy feel of the auditorium. Tight budgets had something to do with it (handcrafted scuzziness comes at a cost). At least the rooftop restaurant contains a retained fragment of the original frontage, turned into a curving freestanding colonnade. And it's great that the inland side of the jam factory has been opened right up to the town. This is practical, but it's also highly symbolic.
The building is still being finished off, so we'll see. But the overall impression is good. After decades of struggling to put on plays in the cavernous old building, it looks like the RSC has got itself a proper Shakespearian theatre at last, with hugely improved facilities both front and back of house. It engages with its surroundings more, and has a big beacon of a lighthouse in the form of that tower to lure in the coach-party brigades. It's not perfect, but it's miles better than what they had before. Bravo for the architecture of bricolage.

Links
The new Royal Shakespeare Theatre will open for public events at the end of the year. In the meantime, book at The Courtyard nearby. www.rsc.org.uk
Audio slideshow by Hugh Pearman on Sunday Times website (registration necessary):http://is.gd/d8WyH
Bennetts Associates, architects: http://www.bennettsassociates.com/
Charcoalblue theatre consultants: http://www.charcoalblue.com/
Gabion: Shakespeare Central: the new RSC theatre at Stratford on Avon
Αναρτήθηκε από Architecture by me στις 10:23 PM