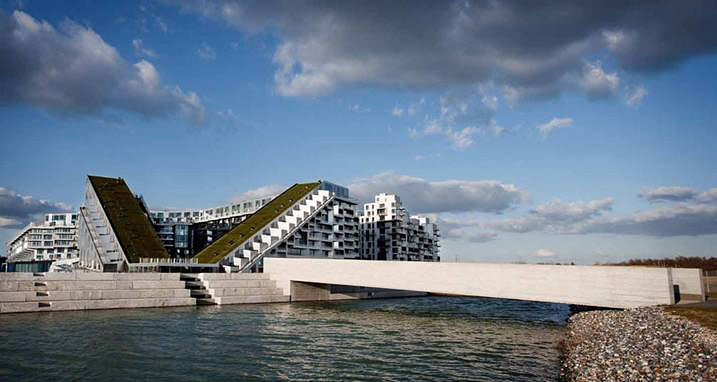 Photo Courtesy of BIG - click image to enlarge
—————————————-
Completing its trilogy of housing projects in Oerestad with the same client, BIG + green roof contractor Veg Tech receives the award for 8 House’s 1,700 sq m sloping green roof. The Scandinavian Green Roof Association based in Malmo, Sweden awarded the Best Green Roof in Scandinavia at an award ceremony at the 8 House in Oerestad, Copenhagen.
—————————————-
Project details:
PROJECT: 8 HOUSE
CLIENT: HØPFNER A/S, DANISH OIL COMPANY A/S, STORE FREDERIKSLUND
ARCHITECTS: BIG
SIZE: 60,000 M2, 475 RESIDENCES
COST: €92,000,000
LOCATION: COPENHAGEN, DK
STATUS COMPLETED: 2009
“8 HOUSE is located in Southern Ørestad on the edge of the Copenhagen Canal and with a view of the open spaces of Kalvebod Fælled. It is a big house in the literal sense of the word. A house offering homes in all its bearings for people in all of life’s stages: the young and the old, nuclear families and singles, families that grow and families that become smaller.
The bow-shaped building creates two distinct spaces, separated by the centre of the bow which hosts the communal facilities of 500 m2. At the very same spot, the building is penetrated by a 9 meter wide passage that connects the two surrounding city spaces: the park area to the west and the channel area to the east.
Instead of dividing the different functions of the building - for both habitation and trades - into separate blocks, the various functions have been spread out horizontally. The apartments are placed at the top while the commercial program unfolds at the base of the building. As a result, the different horizontal layers have achieved a quality of their own: the apartments benefit from the view, sunlight and fresh air, while the office leases merge with life on the street.” 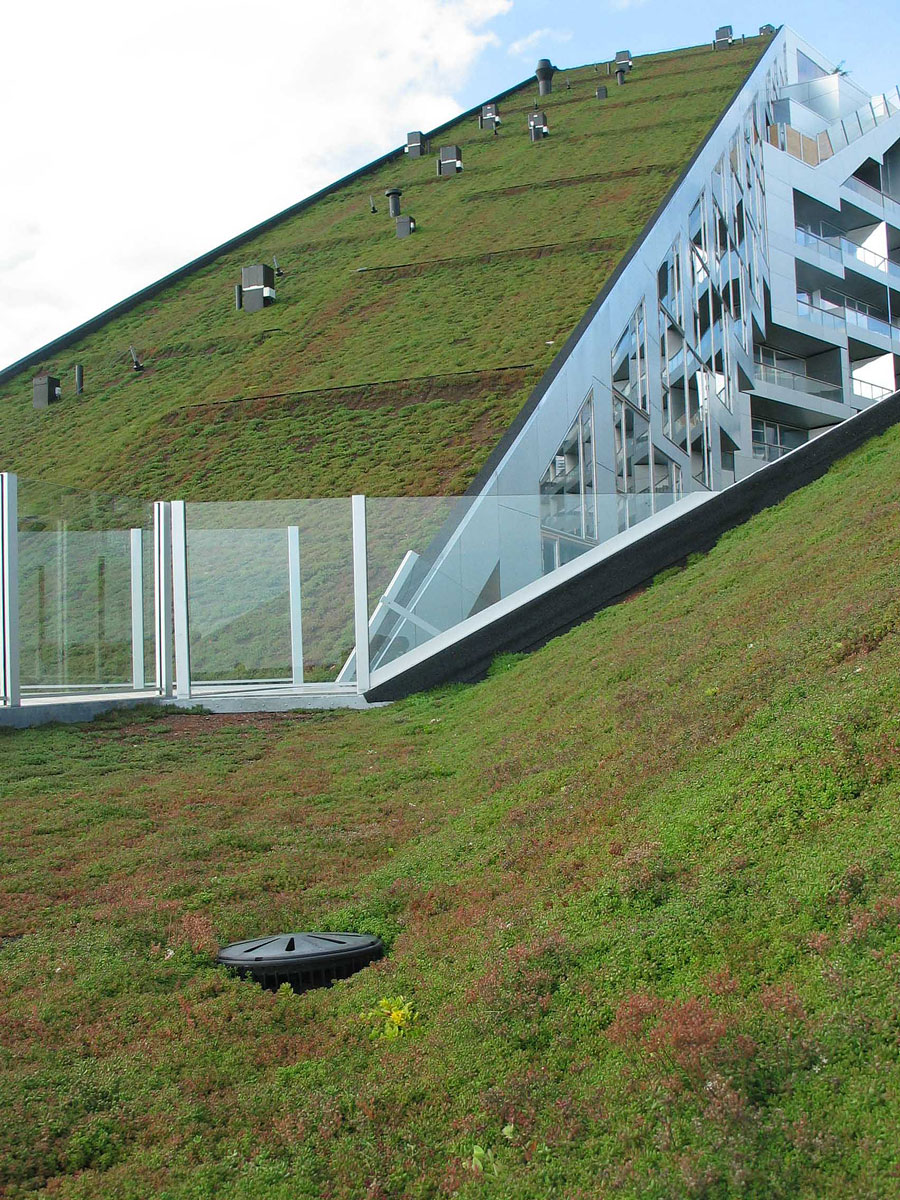 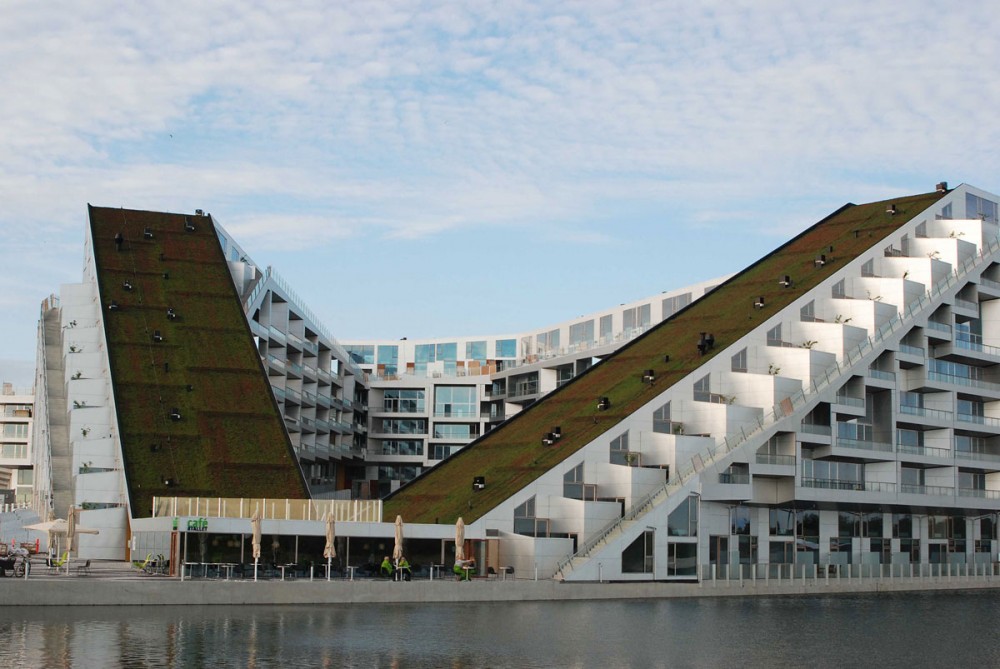 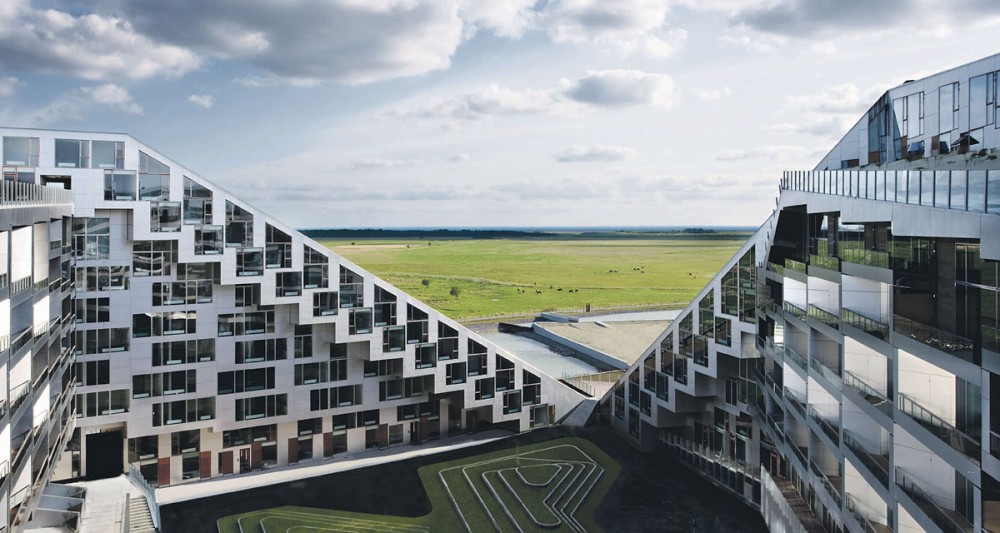 Photo Courtesy of BIG - click image to enlarge
———————————
Announcement of the Award
Completing its trilogy of housing projects in Oerestad with the same client, BIG + green roof contractor Veg Tech receives the award for 8 House’s 1,700 sq m sloping green roof. The Scandinavian Green Roof Association based in Malmo, Sweden awarded the Best Green Roof in Scandinavia at an award ceremony at the 8 House in Oerestad, Copenhagen.
Since 2000, the association has promoted an increased use of green roofs in Scandinavia and created numerous working examples at its Malmo address. In addition the association and its members educate the positive impact of green roofs on urban ecology, and provide inspiration for legislation and building standards.
The moss‐sedum roof of 8 House covers a long, steep and sloping roof surface descending 11 floors downward to the edge of a canal in Oerestad South opening up the interior courtyard to a view of the protected open spaces of Kalvebod Faelled. The 60,000 sq m mixed‐use development is designed in the form of a figure 8 by manipulating the housing typology most often found in Copenhagen. The massing steps up and down depending on access to daylight and views and is broken into four programmatic bars of retail and housing.
Green spaces upon the roof and within the courtyard are strategically placed to reduce the urban heat island effect as well as providing a visual relief to the inhabitants. The first residents have already moved in while the building will be finally completed by 1st of October 2010. Bjarke Ingels of BIG commented: “The parts of the green roof that remain were seen by the client as integral to the building as they are visible from the ground. These not only provide the environmental benefits that we all know come from green roofs, but also add to the visual drama and appeal of the sloping roofs and rooftop terrace in between.”